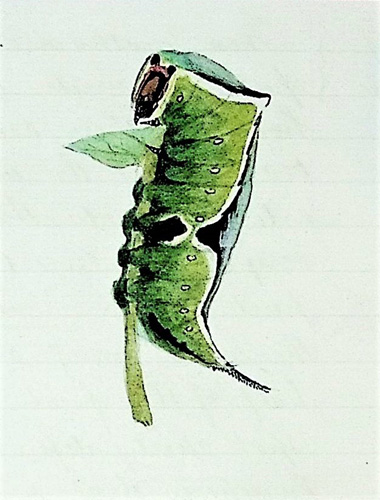 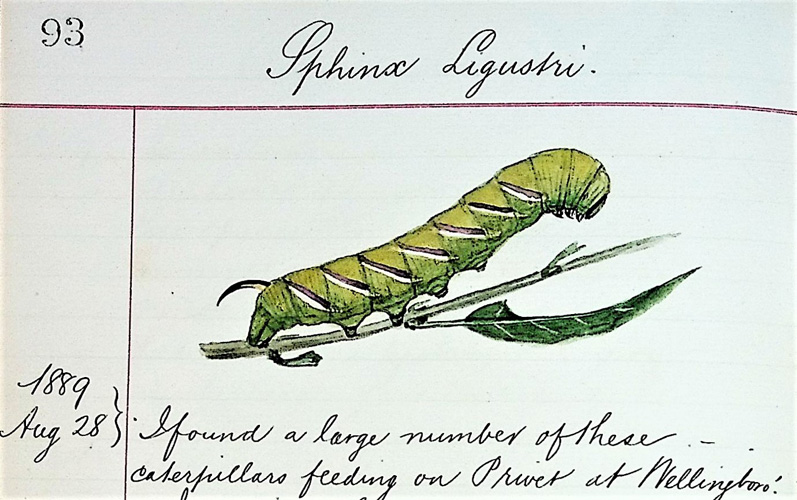 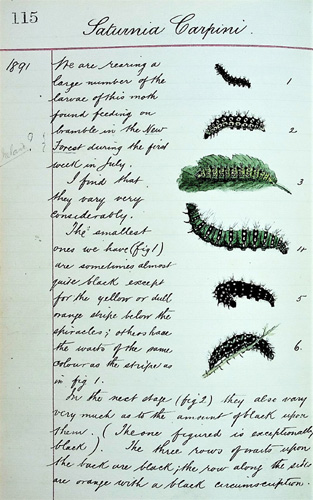 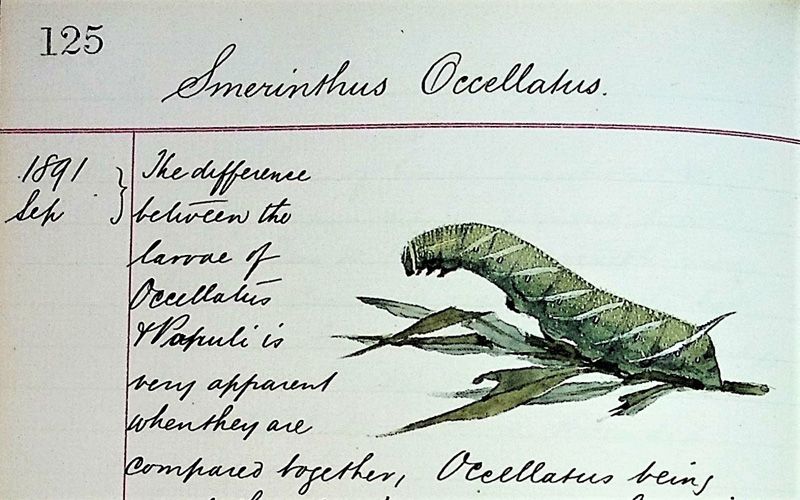 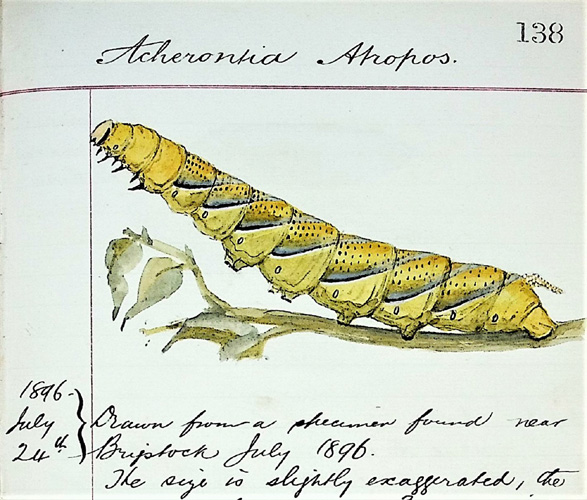 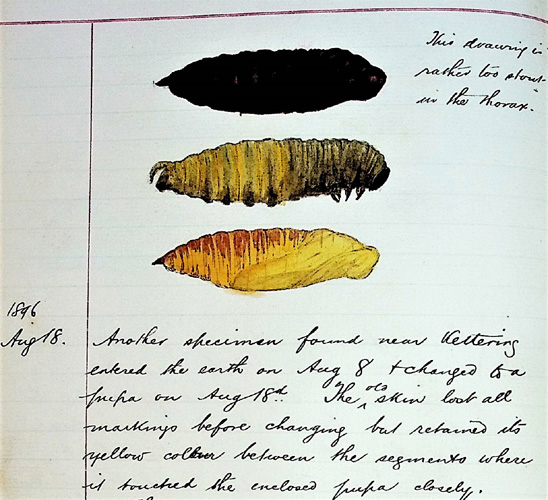 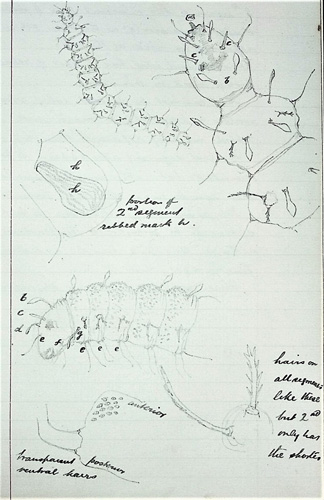 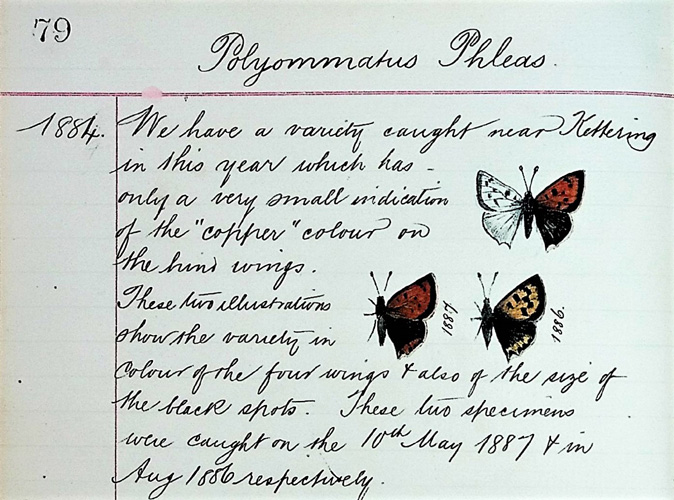 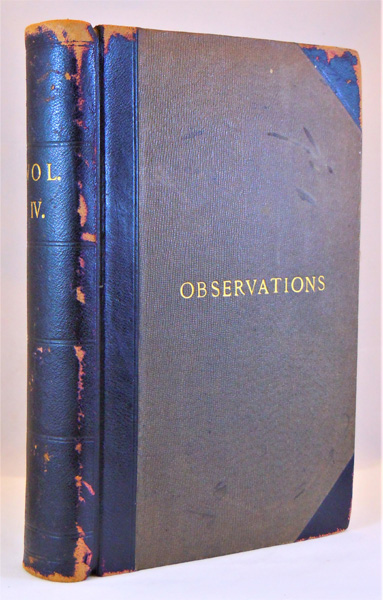 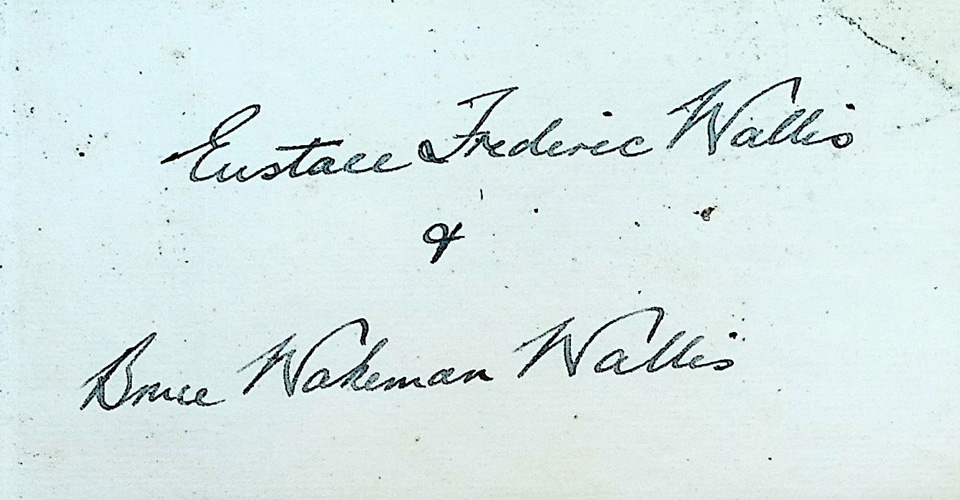 Observations of Insects of Northamptonshire with Watercolor, Pen & Ink, and Pencil Illustrations

1887 - 1938 UNIQUE FIELD NOTEBOOK WITH DETAILED DESCRIPTIONS, DOZENS OF ORIGINAL WATERCOLORS OF MOTH CATERPILLARS AND DRAWINGS OF MINUTE INSECTS. 9 1/2 inches tall hardcover bound in 3/4 leather with pebbled cloth boards, gilt title Observations to cover, title Vol. IV to spine, marbled edges, marbled endpapers, index with alphebetized tabs, 402 numbered ruled pages. CONTENTS: field notebook with handwritted notes dated from June 30, 1887 to 1938, illustrated with original watercolors, pen & ink, and pencil drawings of insects. Front endpaper with autograph names Eustace Frederic Wallis & Bruce Wakeman Wallis, index 23 pp containing Latin names of insect species described in pages 1 - 189. Pages 1-140, dated 1887 - 1896, contain original watercolor paintings and pen & ink drawings of eggs, larvae, pupae and adult British moths, with autograph descriptions of environment, conditions of collection and behavior, as well as phylogenetic identification. Pages 143 - 175 are undated and contain pencil drawings of microscopic parasitic wasps and flies with details of their anatomy. Pages 177 - 188, dated April 8 - December 26, 1917, contain pencil drawings of larvae found on Angelica (wild celery), and page 189 is dated 1938 with a pen & ink drawing of an aphid on Silex (willow). The remaining pages of the book are blank. The watercolor paintings include larvae of Phigalia pilosaria (pale brindled beauty), Dicranura vinula (puss moth), Sphinx ligustri (privet hawk moth), Saturnia carpini (emperor moth), Smerinthus occellatus (eyed hawkmoth), and Acherontia atropos (deaths head hawkmoth). EUSTACE FREDERIC WALLIS (1869 - 1946) was artist of a trompe l'oeil letter auctioned at Sotheby's in 2014. He was also listed as a member from 1879 to 1883 of Boys and Girls Teachers and Officers of Ackworth (Eustace Frederic Wallis, Kettering), and as a member of the Ackworth Old Scholar's Association, June 30, 1889 (Eustace Frederic Wallis, Inglenook, Kettering). Percy Wallis and Eustace Frederic Wallis, 6 Bank Street, Manchester, advertised improvements in shutters for photographic cameras in The Photographic Dealer, November 1899. WHERE HAVE ALL THE INSECTS GONE, Gretchen Vogel, SCIENCE, May 10, 2017, Scientists have tracked alarming declines in domesticated honey bees, monarch butterflies, and lightning bugs. But few have paid attention to the moths, hover flies, beetles, and countless other insects that buzz and flitter through the warm months. Now, a new set of long-term data is coming to light, this time from a dedicated group of mostly amateur entomologists who have tracked insect abundance at more than 100 nature reserves in western Europe since the 1980s. Over that time the group, the Krefeld Entomological Society, has seen the yearly insect catches fluctuate, as expected. But in 2013 they spotted something alarming. When they returned to one of their earliest trapping sites from 1989, the total mass of their catch had fallen by nearly 80%. Perhaps it was a particularly bad year, they thought, so they set up the traps again in 2014. The numbers were just as low. Through more direct comparisons, the group ”which had preserved thousands of samples over 3 decades” found dramatic declines across more than a dozen other sites. Members of the Krefeld society have been observing, recording, and collecting insects from the region ”and around the world” since 1905. Some of the roughly 50 members ”including teachers, telecommunication technicians, and a book publisher” have become world experts on their favorite insects. Since 1968, scientists at Rothamsted Research, an agricultural research center in Harpenden, U.K., have operated a system of suction traps 12-meter-long suction tubes pointing skyward. Set up in fields to monitor agricultural pests, the traps capture all manner of insects that happen to fly over them; they are effectively upside-down Hoovers running 24/7, continually sampling the air for migrating insects, says James Bell, who heads the Rothamsted Insect Survey. Between 1970 and 2002, the biomass caught in the traps in southern England did not decline significantly. Catches in southern Scotland, however, declined by more than two-thirds during the same period. Bell notes that overall numbers in Scotland were much higher at the start of the study. It might be that much of the [insect] abundance in southern England had already been lost by 1970, he says, after the dramatic postwar changes in agriculture and land use. Apart from its artistic appeal, this field notebook from the turn of the century assumes ecologic importance in the 21st century.

Title: Observations of Insects of Northamptonshire with Watercolor, Pen & Ink, and Pencil Illustrations

Observations of Insects of Northamptonshire with Watercolor, Pen & Ink, and Pencil Illustrations