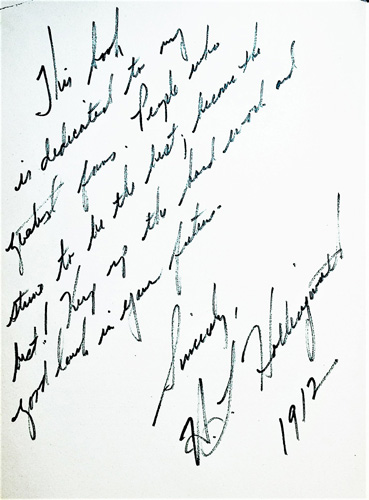 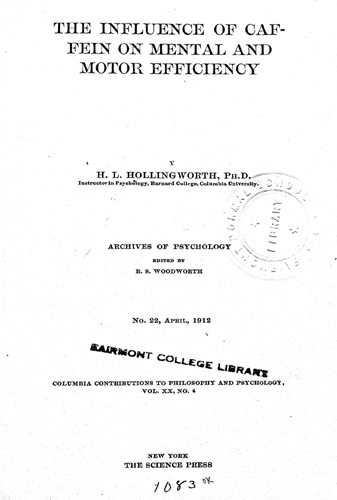 The Influence of Caffein on Mental and Motor Efficiency

1912 LANDMARK STUDY OF MENTAL AND MOTOR EFFECTS OF CAFFEIN IN COCA-COLA, FIRST TO USE DOUBLE-BLIND CONDITIONS--INSCRIBED AND SIGNED BY AUTHOR. 9 1/2 inches tall hardcover, blue buckram binding, iv, 166 pp, institutional library handstamp to edges and title page, embossed seal to title page, small library sticker bottom of last text page; signed and dated author inscription verso of table of contents, This book is dedicated to my greatest fans. People who strive to be the best, become the best! Keep up the hard work and good luck in your future. Sincerely, H. L. Hollingworth 1912. Covers unmarked, binding tight, pages age-toned, edges friable with closed tears repaired with archival tape, upper corner missing from last page, not affecting text; good+. HARRY LEVI HOLLINGWORTH (1880 - 1956) was one of the first psychologists to bring psychology into the advertising world, as well as a pioneer in applied psychology. Following his earning a PhD from Columbia, Hollingworth took an instructor's position at Barnard College, teaching psychology and logic. The Coca-Cola Company, facing a lawsuit from the federal government under the Pure Food and Drug Act, approached Hollingworth (after James McKeen Cattell and several other psychologists turned them down) about investigating the psychological effects of caffeine on humans. Aware of the stigma associated with applied work, as well as possible concerns about the scientific integrity of research funded by a corporation, Hollingworth included several conditions in his contract with Coca-Cola. Specifically, Hollingworth stated that Coca-Cola could not use the results of his research in its advertisements, nor could Hollingworthâ€™s name or that of Columbia University be used in these ads. Additionally, Hollingworth was free to publish the results of his research regardless of the outcome of the study. Furthermore, to reduce any questions about the integrity of his research Hollingworth designed his three caffeine studies to include blind and double-blind conditions. The scope and methodology employed in these studies had never before been seen applied to psychological research. These studies generated a huge amount of data which had to be duplicated following each night's analysis and housed in a separate location. After completing his studies Hollingworth traveled to Chattanooga to testify at the Coca-Cola trial. Here he presented the results of his studies where he had found no deleterious effects on motor or mental performance. Although Hollingworth's testimony was well received, and the case against Coca-Cola was ultimately dismissed, the dismissal was not a result of his testimony. Following Hollingworth's testimony at the trial, and the favouable media coverage that accompanied it, he received an incredible number of requests for further applied work. During World War I Hollingworth was asked by the Surgeon General's Office to administer psychological services to shell-shocked soldiers who returned from the war. From his observations of these men Hollingworth developed a theory of functional neurosis, which he published in 1920 in one of the first books on clinical psychology, The Psychology of Functional Neurosis. In 1927 Hollingworth was elected president of the American Psychological Association.

Title: The Influence of Caffein on Mental and Motor Efficiency

The Influence of Caffein on Mental and Motor Efficiency