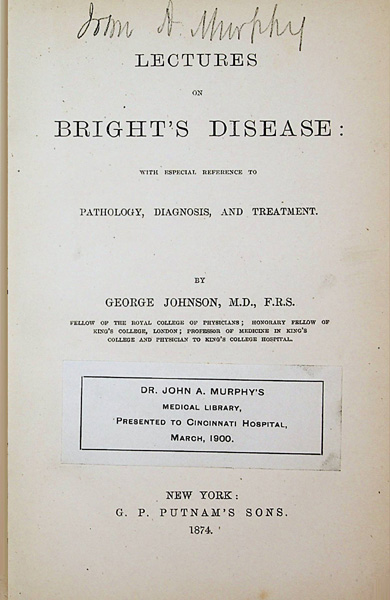 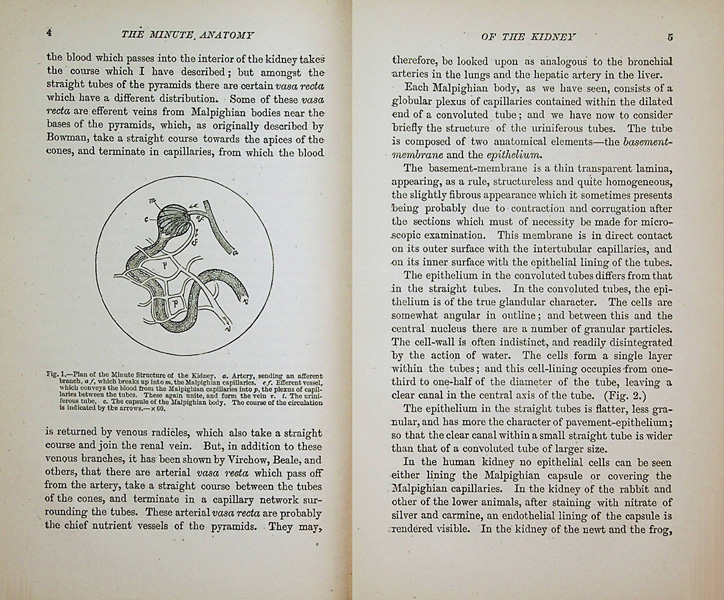 Lectures on Bright's Disease: with especial reference to Pathology, Diagnosis, and Treatment

MONOGRAPH ON CHRONIC KIDNEY DISEASE BY THE LEADING NEPHROLOGIST IN BRITAIN. 8 inch tall harcover, xi, 152 pages, original brown cloth boards, gilt title to spine, 32 wood engravings in text. Label affixed to title page, Dr. John A. Murphy's Medical Library, Presented to Cincinnati Hospital, March, 1900, with signature of John A Murphy top of page. Small 1/8 gouge to edge of spine, spine ends chipped, otherwise very good. SIR GEORGE JOHNSON (1818 - 1896) was an eminent English physician who became recognized as an authority on cholera and kidney diseases. In October 1839 he entered the medical school of King's College London. He was an outstanding scholar, winning many prizes and a senior medical scholarship. After leaving college, Johnson served in King's College Hospital as house physician and then house surgeon. From 1857 to 1863 he was Professor of Materia medica (pharmacology) and from 1863 to 1876 he was Professor of Medicine. In 1862 Johnson was elected a member of the senate of the University of London. In 1872 he was made a fellow of the Royal Society. In 1876 Johnson attempted to treat Charles Bravo, a British lawyer who was fatally poisoned with antimony in what became known as the Murder at the Priory. The Lancet of August 1876 published his detailed account of the symptoms, treatment and progress of the illness. In 1889 Queen Victoria made him a Physician-Extraordinary. He was knighted in 1892. Johnson became recognized as an authority on cholera and on kidney diseases, and published several works on these subjects. He reintroduced the picric acid test for albumen and the picric acid and potash test for sugar. He was a strong supporter of the views of Richard Bright on kidney disease, and discovered hypertrophy of the small arteries in Bright's disease. GARRISON-MORTON No. 4251.1 Also cited in Feehally Landmark Papers in Nephrology (Oxford, 2013): Johnson was arguably the leading clinician in the field of renal medicine in Britain in the second half of the nineteenth century.

Title: Lectures on Bright's Disease: with especial reference to Pathology, Diagnosis, and Treatment

Lectures on Bright's Disease: with especial reference to Pathology, Diagnosis, and Treatment