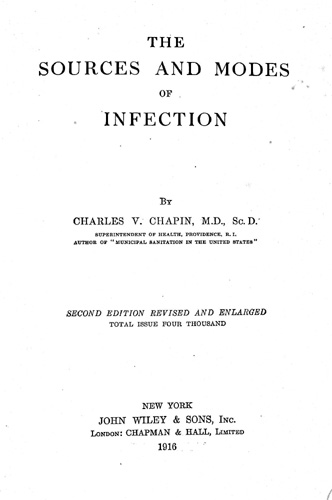 The Sources and Modes of Infection

1916 INFLUENTIAL MONOGRAPH ON HUMAN DISEASE TRANSMISSION, IDENTIFICATION OF CARRIERS, INDICATIONS FOR ISOLATION--PUBLISHED DURING WORLD WAR I. 8 inches tall hardcover, black cloth binding, covers blindstamped, gilt title to spine, xi, 481 pp; previous owner pencilled name front flyleaf, no other markings, very good in custom archival mylar cover. CHARLES VALUE CHAPIN (1856 - 1941) was an American pioneer in public health research and practice during the Progressive Era. He received his medical education at Bellevue Hospital Medical College in New York. He was superintendent of health for Providence, Rhode Island between 1884 and 1932. He also served as President of the American Public Health Association in 1927. His main fields of operation were working in the bacteriological laboratory, organizing public health measures, and publicizing urgent public health needs. His scientific observations on the nature of the spread of infectious disease gained widespread support. His book, The Sources and Modes of Infection, influenced physicians and public health officials across United States and Europe by demonstrating the central importance of the human carrier who does not have the symptoms of the disease but carries the germs and spreads it.

Title: The Sources and Modes of Infection

The Sources and Modes of Infection