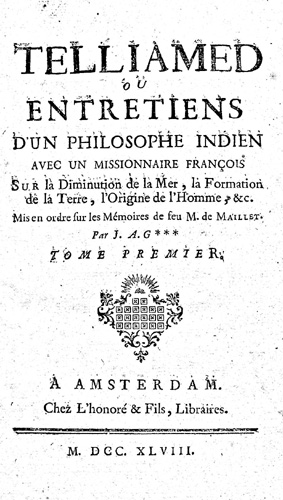 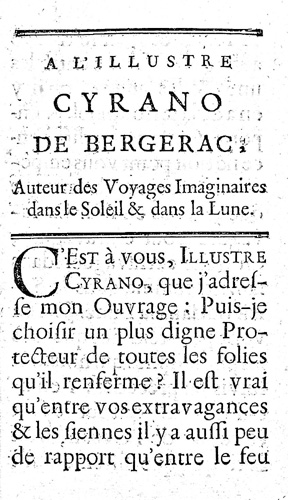 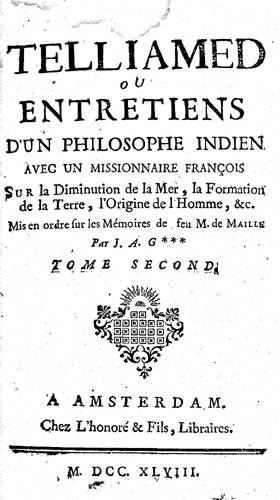 OVER 100 YEARS BEFORE DARWIN--FIRST EDITION BY A FRENCH DIPLOMAT OF A PHILOSOPHIC TREATISE PROPOSING THAT THE EARTH AND LIFE EVOLVED OVER DEEP TIME. 7 3/4 inches tall hardcover octavo, full calf binding, spine with tooled gilt compartments, red leather gilt title label, edges red-stained, marbled endpapers, two volumes in one: pp. [1-10] i-cxix [2] 1-208 [2] [1-231 [1] [note: pages 113-120 of volume one were not printed), wear to cover edges, binding tight, scattered light foxng, very good. TEXT IN FRENCH. First edition of this important, controversial, and strangely prescient work, dedicated to Cyrano de Bergerac. By using the device of an imaginary voyage to India by a French missionary, and by presenting the work's philosophy as the beliefs of an Indian mystic, Maillet sought to make palatable his pre-Darwinian theories of evolution. Primarily a geological treatise, presented as the theories of an Indian mystic encountered by a French missionary during an imaginary voyage to India, based on Maillet's extensive travels in Europe and the Near East, which attempts to relate man to geology and geology to the universe within the context of Cartesian logic. His theories are said to have influenced Diderot and Darwin. Cioranescu 41376. Sabin 43891. BENOIT DE MAILLET (1656-1738) was a diplomat and explorer. His fame rests almost exclusively on this work, which Ward and Carozzi described as introducing 'the concept of slow changes over a great period of time and that of a diminishing ocean as well as the evolution of marine life into terrestrial life. Generally, the work was based on de Maillet's observations throughout Europe, and depends on the study of geological age to contradict the biblical chronology. Although most of the theory is sheer fancy - in particular his belief that the earth is in fact a burnt out star - his insistence on the importance of scientific study of rock formations was influential. It also uses classical and modern precedent to tentatively suggest that all life may in fact have had its origins in the sea. The work was not published until ten years after de Maillet's death, and even then reluctantly, by his friend the Abbe Le Mascrier, who was also responsible for the work's dedication to Cyrano de Bergerac. Even with this posthumous publication, Le Mascrier still found it easier to attribute the work to an Indian philosopher (the eponymous 'Telliamed' is a simple inversion of the author's real name) in an attempt to dilute its radical impact. Sabin comments that it was 'long supposed to have suggested to Mr. Darwin his celebrated theory.' Barbier, IV, p. 673; Ward and Carozzi 1457. Great fame was achieved by de Maillet in Telliamed [published in] 1748,1749,1755 (translated into English and published in London in 1750 and in Baltimore in 1797). He introduced the concept of slow changes over a great period of time and that of a diminishing universal ocean as well as the evolution of marine life into terrestrial life. Everybody read Telliamed, which had circulated before in manuscript form among the forbidden literature in France (Dederick fii Ward and Albert Carozzi, Geology Emerging, Introduction).