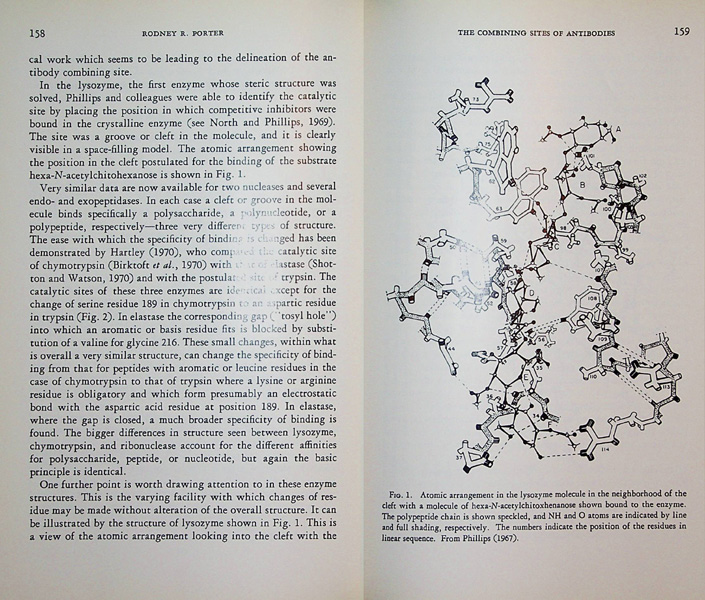 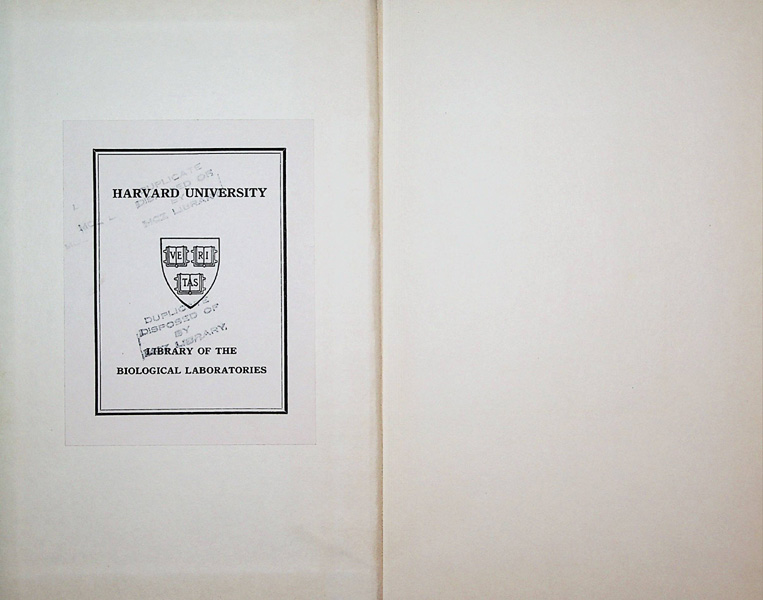 KEY LECTURES IN BIOCHEMISTRY AT THE DAWN OF MOLECULAR BIOLOGY BY WINNERS OF THE LASKER AWARD AND NOBEL PRIZE. 8 1/4 inches tall hardcover, xiv, 233 pages, red cloth binding, illustrated, corners bumped, university library bookplate to front paste-down, very good. THE HARVEY SOCIETY is a learned society based in New York City, Named after the British scientist William Harvey (1578-1657), its scope is 'the diffusion of knowledge of the medical sciences'. Since its founding in 1905, the society has sponsored an annual series of lectures given by leading biomedical researchers which it publishes in book form at the end of the year. On 1 April 1905 a group of 13 prominent New York physicians and scientists met at 9 East 74 Street in the residence of physiologist Graham Lusk. Also in attendance was John J. Abel, a noted pharmacologist from the Johns Hopkins University School of Medicine. Their intention was to form a society which would forge a 'closer relationship between the purely practical side of medicine and the results of laboratory investigation' by organizing a lecture series which would be open to physicians, scientists, and the general public. Many of the speakers were the recipients of the Lasker Award or the Nobel Prize. This volume contains lectures by Daniel Koshland on A Molecular Model for the Regulatory Behavior of Enzymes and Rodney Porter on The Combining Sites of Antibodies. DANIEL EDWARD KOSHLAND, JR. (1920 - 2007) was an American biochemist and a Member of the United States National Academy of Sciences. He matriculated from the University of California at Berkeley then spent the war years (1941-46) working with Glenn T. Seaborg at the University of Chicago on the top-secret Manhattan project, where his team purified the plutonium that was used to make the atomic bomb at Los Alamos. His early work in enzyme kinetics at Brookhaven National Laboratory and Rockefeller University led him to propose the induced fit model for enzyme catalysis. Koshland served as editor of the journal Science from 1985 to 1995. In 1998, Koshland was awarded the Albert Lasker Special Achievement Award given by the Lasker Foundation for medical research in the United States. In 2008, the award was renamed the Lasker-Koshland Special Achievement Award in Medical Science in honor of Koshland. Koshland wrote in an autobiographical article that he decided to become a scientist in the eighth grade after reading two popular books about science, Microbe Hunters by Paul de Kruif and Arrowsmith by Sinclair Lewis. RODNEY ROBERT PORTER (1917 - 1985) was an English biochemist and Nobel laureate. He received his Bachelor of Science degree from the University of Liverpool in 1939 for Biochemistry and moved to the University of Cambridge where he became Fred Sanger's first PhD student. In 1967 he was appointed Whitley Professor of Biochemistry at the University of Oxford, and Fellow of Trinity College, Oxford. His colleague Elizabeth Press (Betty Press) worked with him at NIMR, St Mary's and at Oxford contributing extensively to the work which led to the Nobel Prize. In 1972, Porter shared the Nobel Prize for Medicine or Physiology with Gerald M. Edelman for determining the chemical structure of an antibody.