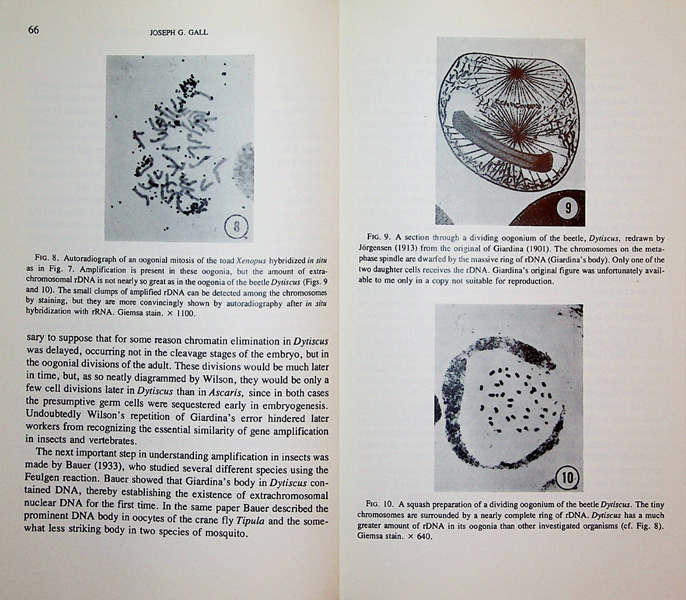 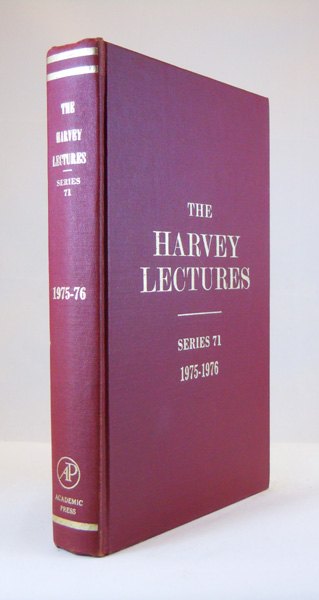 The Harvey Lectures delivered under the auspices of the Harvey Society of New York, Series 71

KEY LECTURES IN MOLECULAR BIOLOGY AND NEUROSCIENCE BY WINNERS OF THE LASKER AWARD AND NOBEL PRIZE. 8 1/4 inches tall hardcover, red cloth binding, illustrated, corners bumped, university library bookplate to front paste-down, very good. THE HARVEY SOCIETY is a learned society based in New York City, Named after the British scientist William Harvey (1578-1657), its scope is 'the diffusion of knowledge of the medical sciences'. Since its founding in 1905, the society has sponsored an annual series of lectures given by leading biomedical researchers which it publishes in book form at the end of the year. On 1 April 1905 a group of 13 prominent New York physicians and scientists met at 9 East 74 Street in the residence of physiologist Graham Lusk. Also in attendance was John J. Abel, a noted pharmacologist from the Johns Hopkins University School of Medicine. Their intention was to form a society which would forge a 'closer relationship between the purely practical side of medicine and the results of laboratory investigation' by organizing a lecture series which would be open to physicians, scientists, and the general public. Many of the speakers were the recipients of the Lasker Award or the Nobel Prize. The Lasker Awards have been awarded annually since 1945 to living persons who have made major contributions to medical science or who have performed public service on behalf of medicine. They are administered by the Lasker Foundation, founded by Albert Lasker and his wife Mary Woodard. Known as 'America's Nobels', the Lasker Award has identified many future winners of the Nobel Prize. This volume contains lectures by Joseph Gall on Early Studies on Gene Amplification and Roger Guillemin on Control of Adenohypophysial Functions by Peptides of the Central Nervous System. JOSEPH GRAFTON GALL (born April 1928) is an American cell biologist and winner of the 2006 Albert Lasker Special Achievement Award. Gall is credited with encouraging women biologists, a group sometimes called 'Gall's Gals', in an era when this was relatively uncommon. One of his students who went on to do important work in the science was Susan Gerbi. Gall and then-graduate student Mary-Lou Pardue developed the common laboratory technique known as in situ hybridization. ROGER CHARLES LOUIS GUILLEMIN (born January 11, 1924 in Dijon, France) received the Nobel prize for medicine in 1977 for his work on neurohormones. Completing his undergraduate work at the University of Burgundy, Guillemin received his M.D. degree from the Medical Faculty at Lyon in 1949, and went to Montreal, Quebec, Canada, to work with Hans Selye at the Institute of Experimental Medicine and Surgery at the Université de Montréal where he received a Ph.D. in 1953. The same year he moved to the United States to join the faculty at Baylor College of Medicine at Houston. In 1965, he became a naturalized citizen of the United States. In 1970 he helped to set up the Salk Institute in La Jolla, California where he worked until retirement in 1989. Guillemin and Andrew V. Schally discovered the structures of TRH and GnRH in separate laboratories.

Title: The Harvey Lectures delivered under the auspices of the Harvey Society of New York, Series 71

The Harvey Lectures delivered under the auspices of the Harvey Society of New York, Series 71