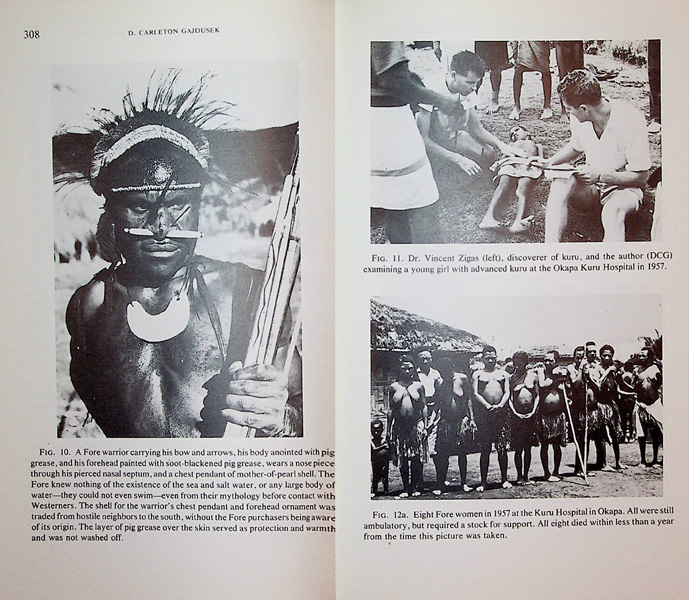 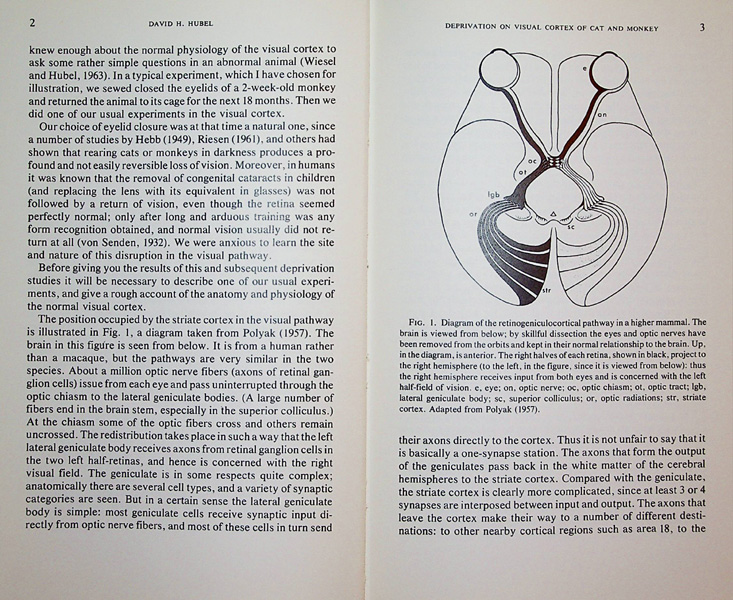 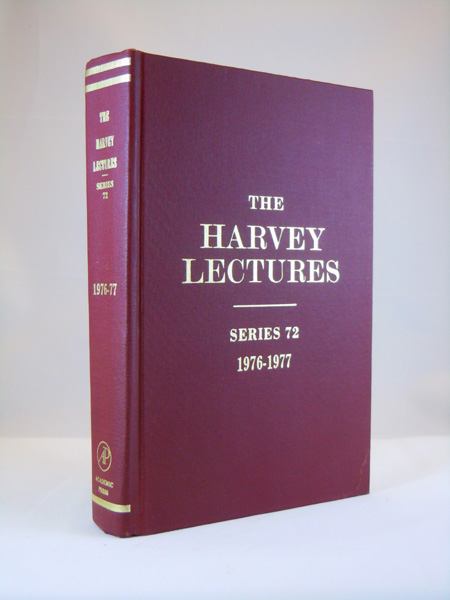 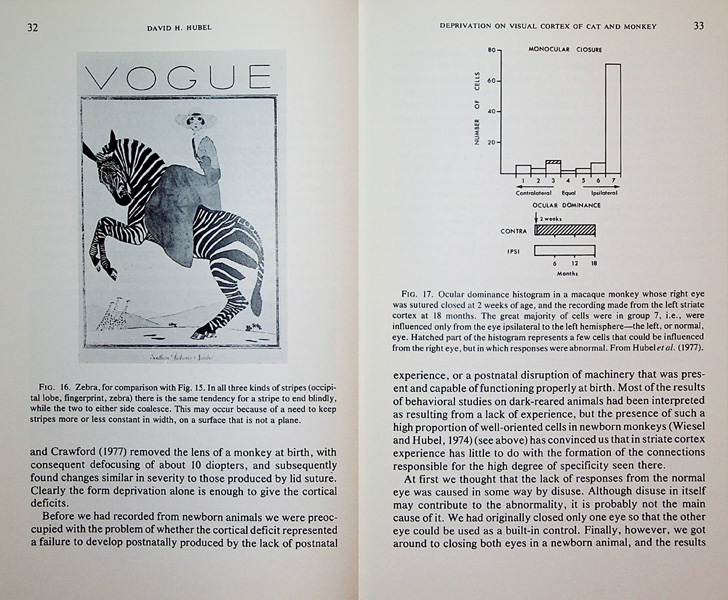 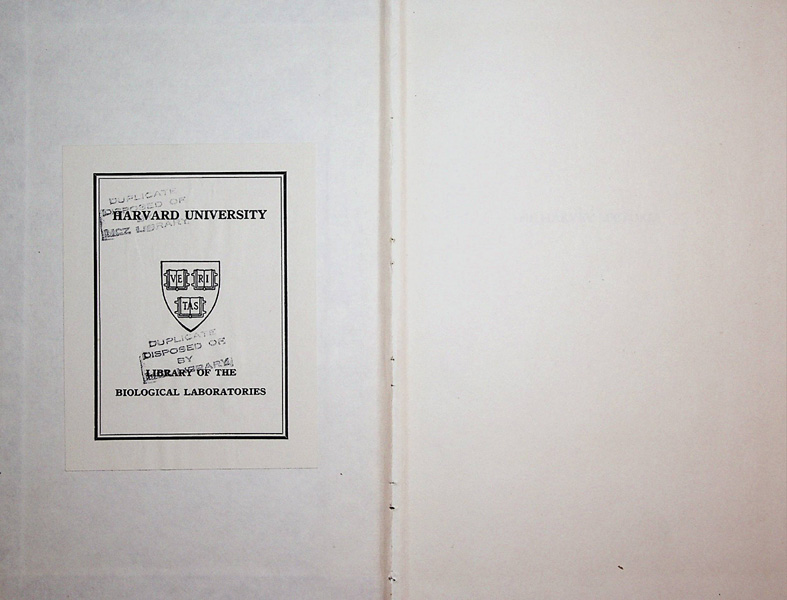 LANDMARK DISCOVERIES IN NEUROSCIENCE AND INFECTIOUS DISEASE BY NOBEL LAUREATES. 8 1/4 inches tall hardcover, xiv, 398 pages, red cloth binding, illustrated, corners bumped, university library bookplate to front paste-down, very good. THE HARVEY SOCIETY is a learned society based in New York City, Named after the British scientist William Harvey (1578-1657), its scope is the diffusion of knowledge of the medical sciences. Since its founding in 1905, the society has sponsored an annual series of lectures given by leading biomedical researchers which it publishes in book form at the end of the year. On 1 April 1905 a group of 13 prominent New York physicians and scientists met at 9 East 74 Street in the residence of physiologist Graham Lusk. Also in attendance was John J. Abel, a noted pharmacologist from the Johns Hopkins University School of Medicine. Their intention was to form a society which would forge a closer relationship between the purely practical side of medicine and the results of laboratory investigation by organizing a lecture series which would be open to physicians, scientists, and the general public. Many of the speakers were the recipients of the Lasker Award or the Nobel Prize. The Lasker Awards have been awarded annually since 1945 to living persons who have made major contributions to medical science or who have performed public service on behalf of medicine. They are administered by the Lasker Foundation, founded by Albert Lasker and his wife Mary Woodard. Known as America's Nobels, the Lasker Award has identified many future winners of the Nobel Prize. This volume contains lectures by David Hubel on Effects of Deprivation on the Visual Cortex of Cat and Monkey and D. Carlton Gajdusek on Slow Infections with Unconventional Viruses. DAVID HUNTER HUBEL (1926 - 2013) was a Canadian neurophysiologist noted for his studies of the structure and function of the visual cortex. He was recipient of the 1981 Nobel Prize in Physiology or Medicine for his discoveries concerning information processing in the visual system. The Hubel and Wiesel experiments greatly expanded the scientific knowledge of sensory processing. The partnership lasted over twenty years and became known as one of the most prominent research pairings in science. In one experiment, done in 1959, they inserted a microelectrode into the primary visual cortex of an anesthetized cat. They then projected patterns of light and dark on a screen in front of the cat. They found that some neurons fired rapidly when presented with lines at one angle, while others responded best to another angle. Some of these neurons responded to light patterns and dark patterns differently. Hubel and Wiesel received the Nobel Prize for two major contributions: firstly, their work on development of the visual system, which involved a description of ocular dominance columns in the 1960s and 1970s; and secondly, their work establishing a foundation for visual neurophysiology, describing how signals from the eye are processed by the brain to generate edge detectors, motion detectors, stereoscopic depth detectors and color detectors, building blocks of the visual scene. These studies opened the door for the understanding and treatment of childhood cataracts and strabismus. DANIEL CARLETON GAJDUSEK (1923 - 2008) was an American physician and medical researcher who received the Nobel Prize in Physiology or Medicine in 1976 for work on kuru, the first human prion disease demonstrated to be infectious. Gajdusek's best-known work focused on kuru. This disease was rampant among the South Fore people of New Guinea in the 1950s and 1960s. Gajdusek connected the spread of the disease to the practice of funerary cannibalism by the South Fore. With elimination of cannibalism, kuru disappeared among the South Fore within a generation. Gajdusek concluded that kuru was transmitted by the ritualistic consumption of the brains of deceased relatives, which was practiced by the Fore. He then proved this hypothesis by successfully transmitting the disease to primates and demonstrating that it had an unusually long incubation period of several years. Gajdusek became head of the laboratories for virological and neurological research at the National Institutes of Health (NIH) in 1958. Fellow laboratory chiefs included Ernst Freese and Marshall Warren Nirenberg. Gajdusek was inducted to the National Academy of Sciences in 1974 in the discipline of microbial biology.