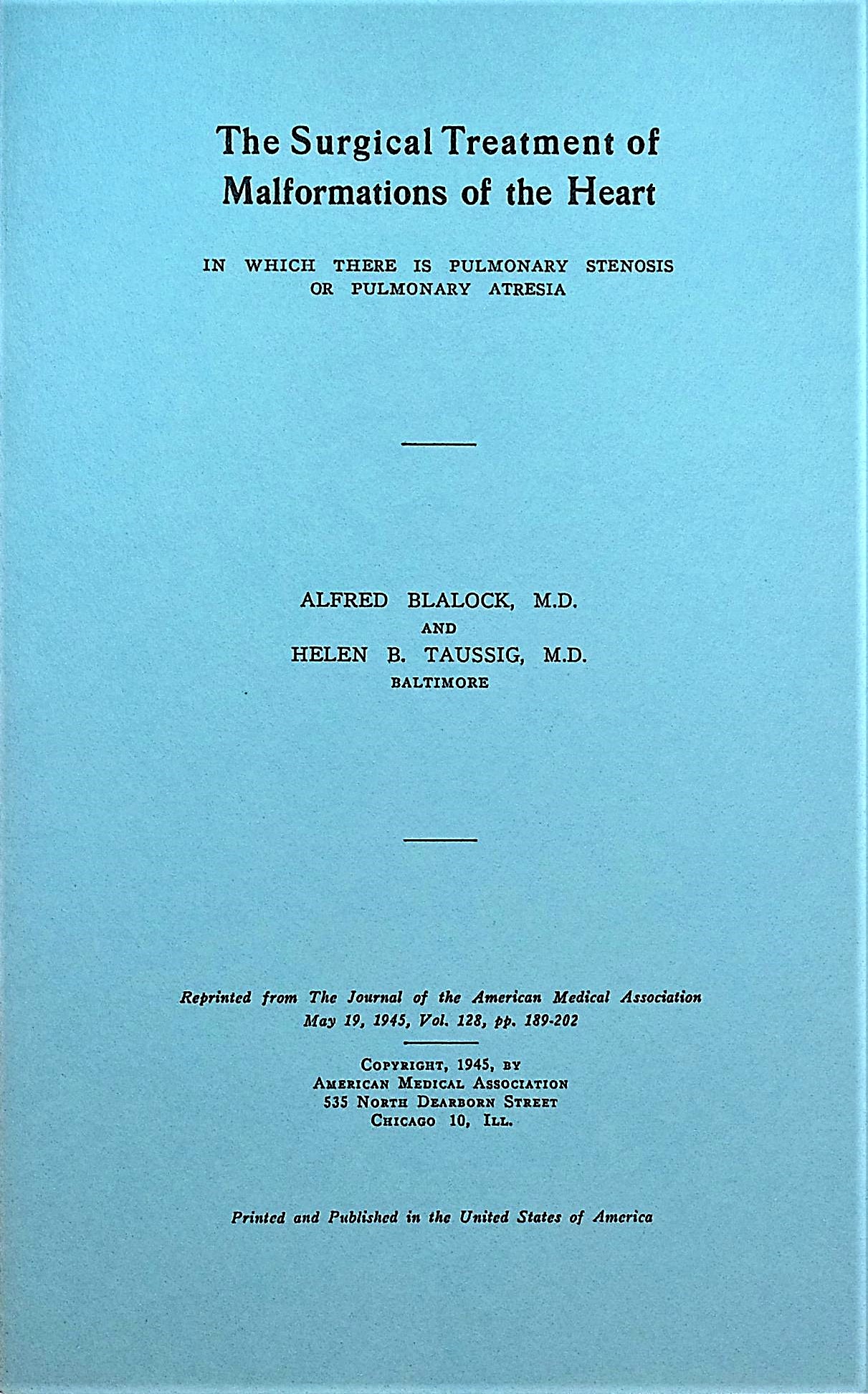 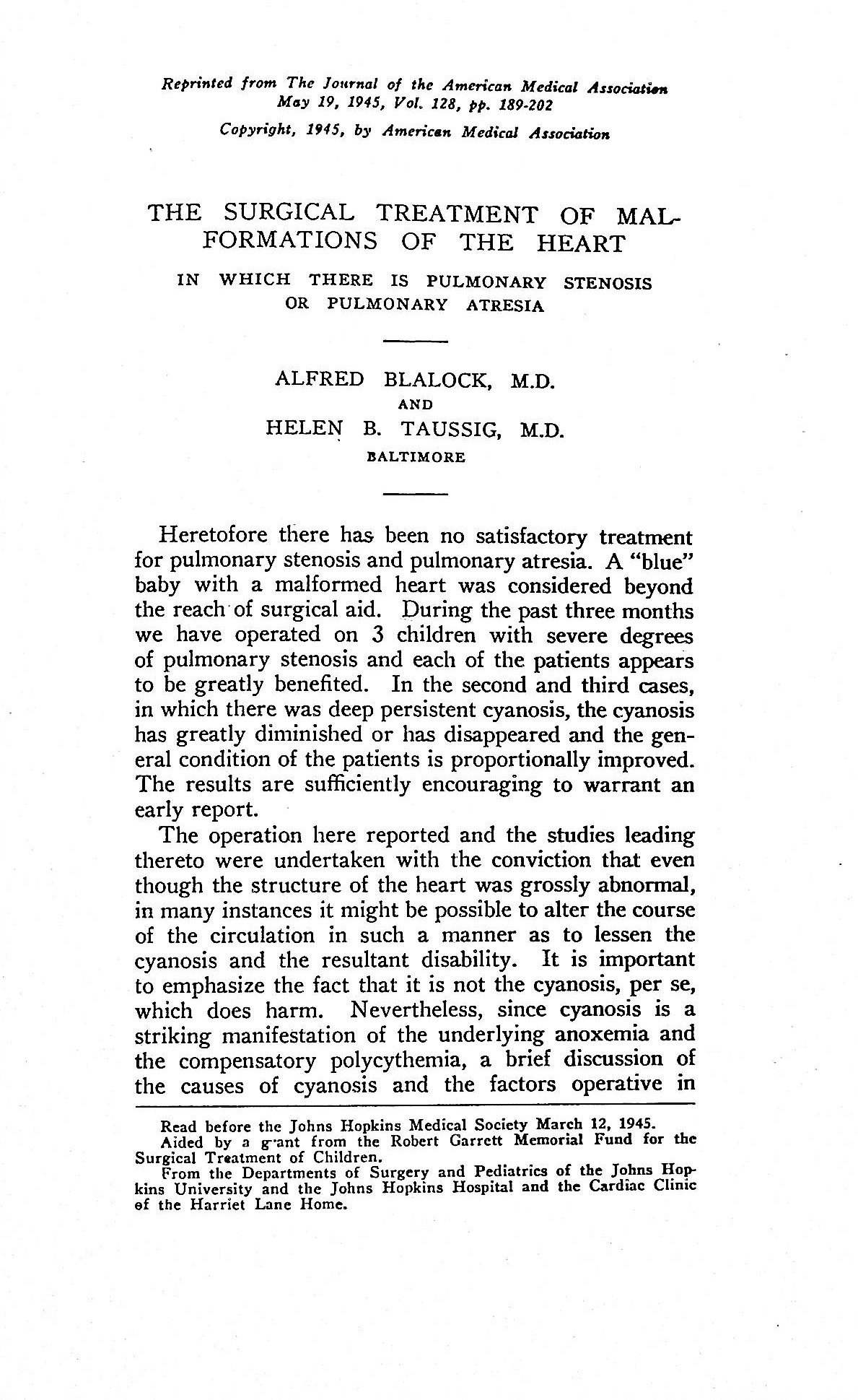 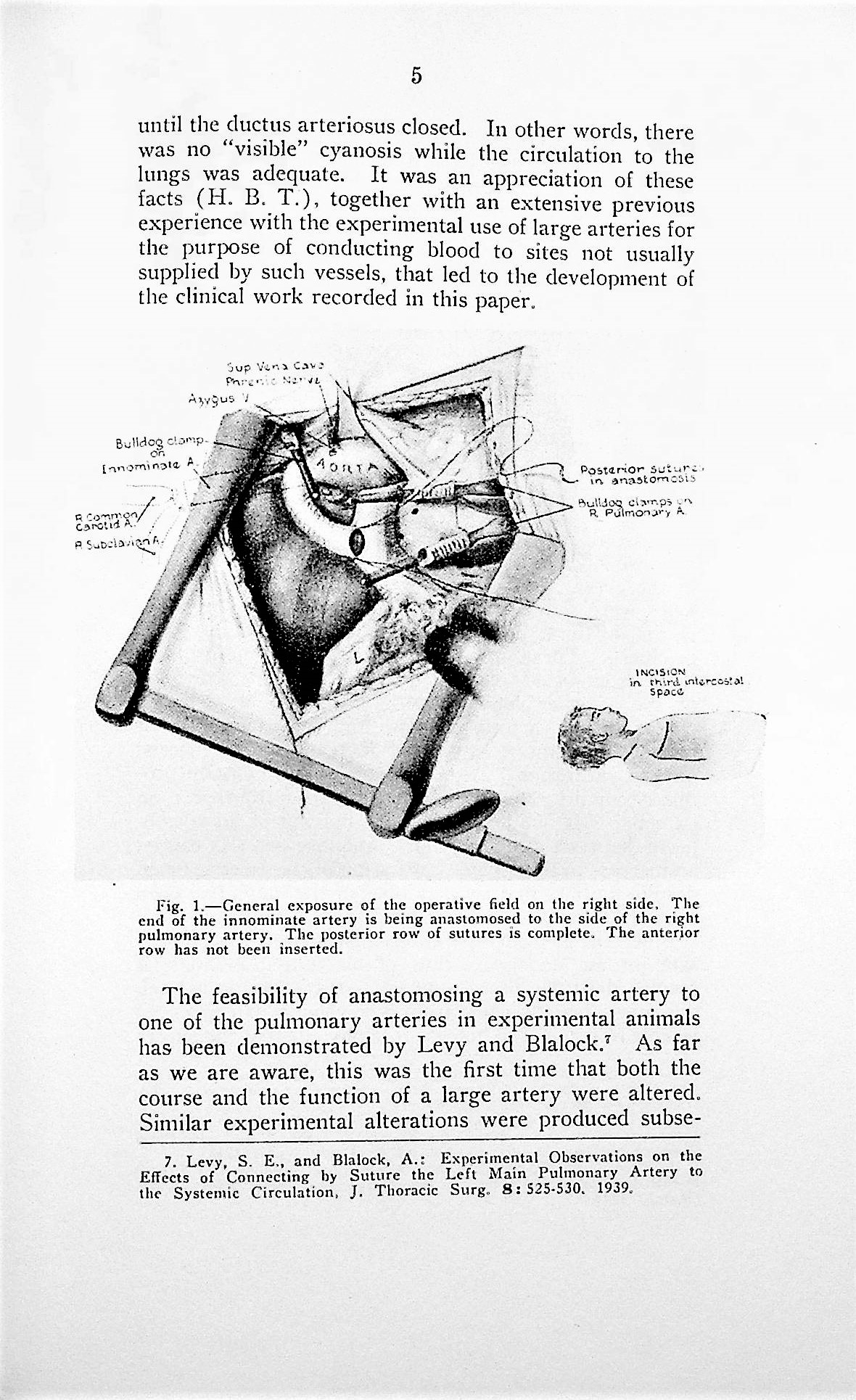 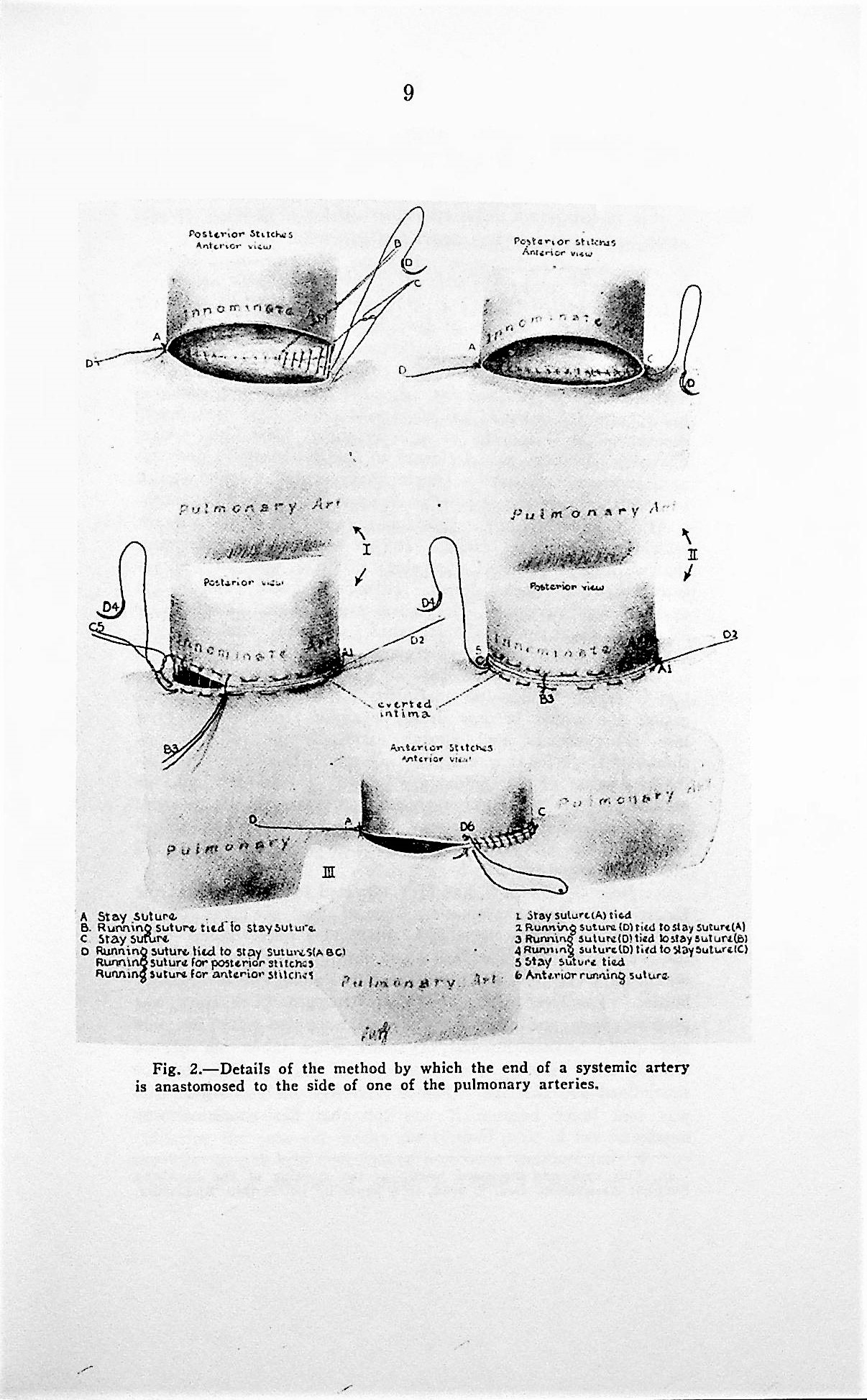 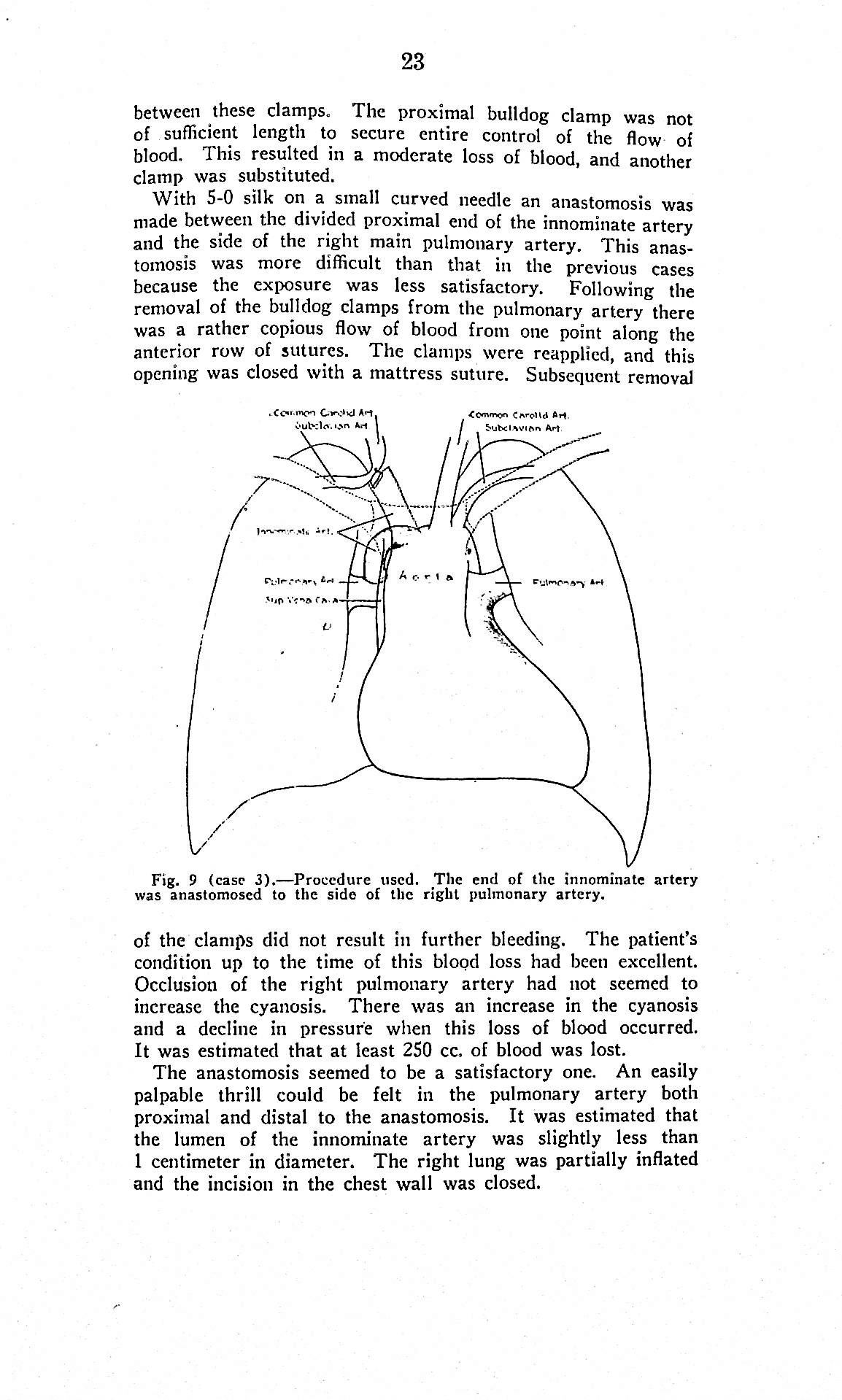 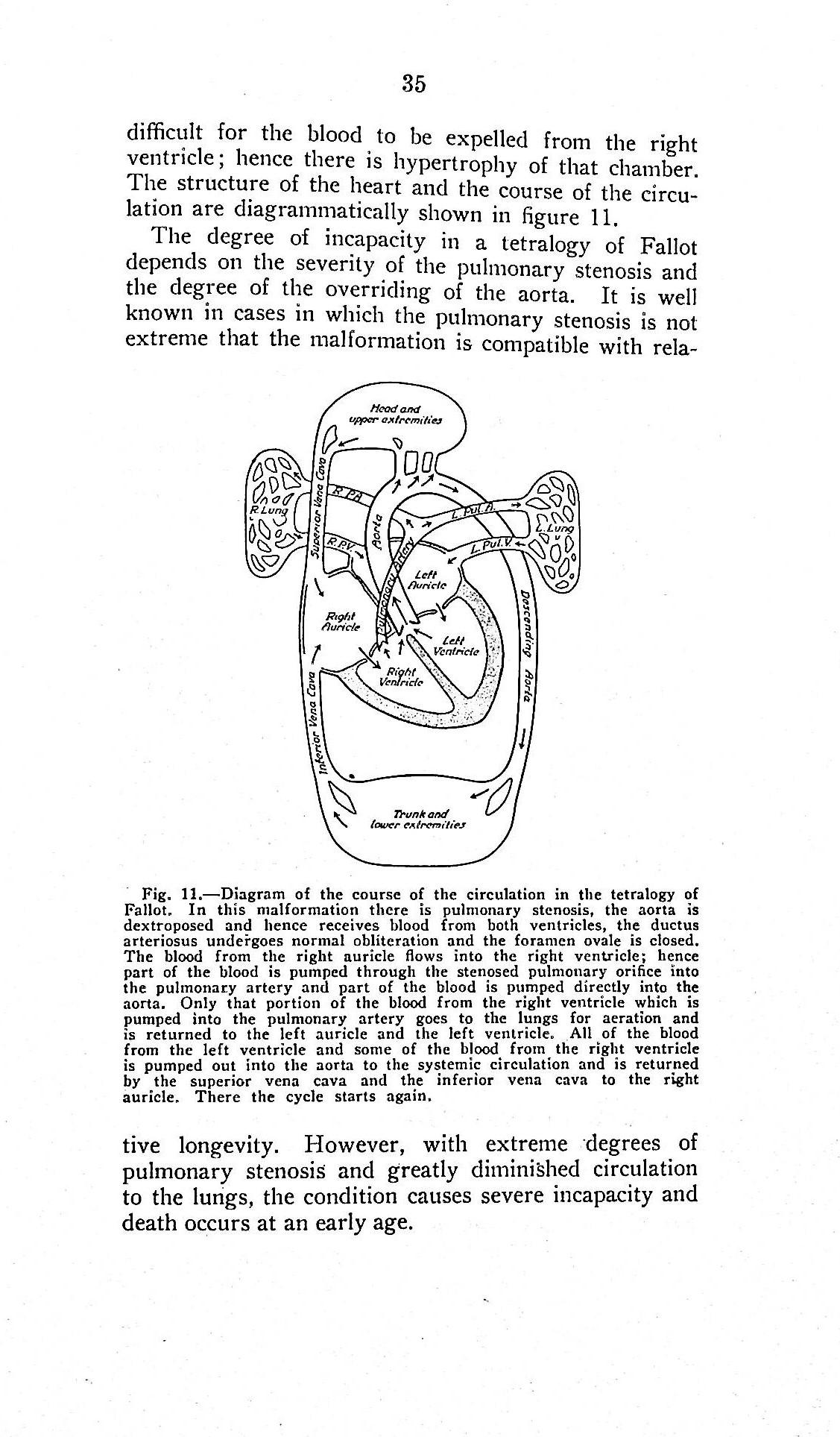 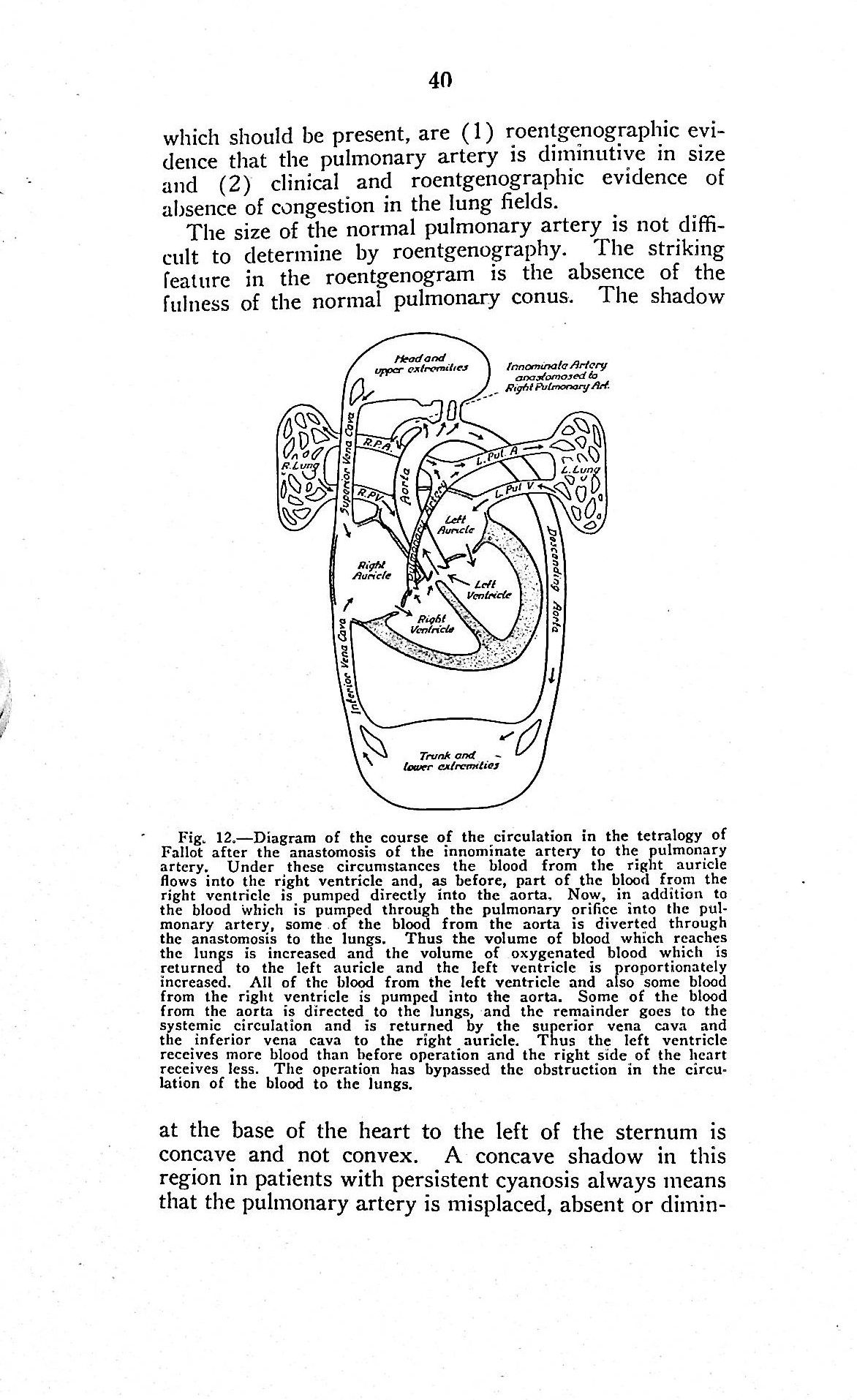 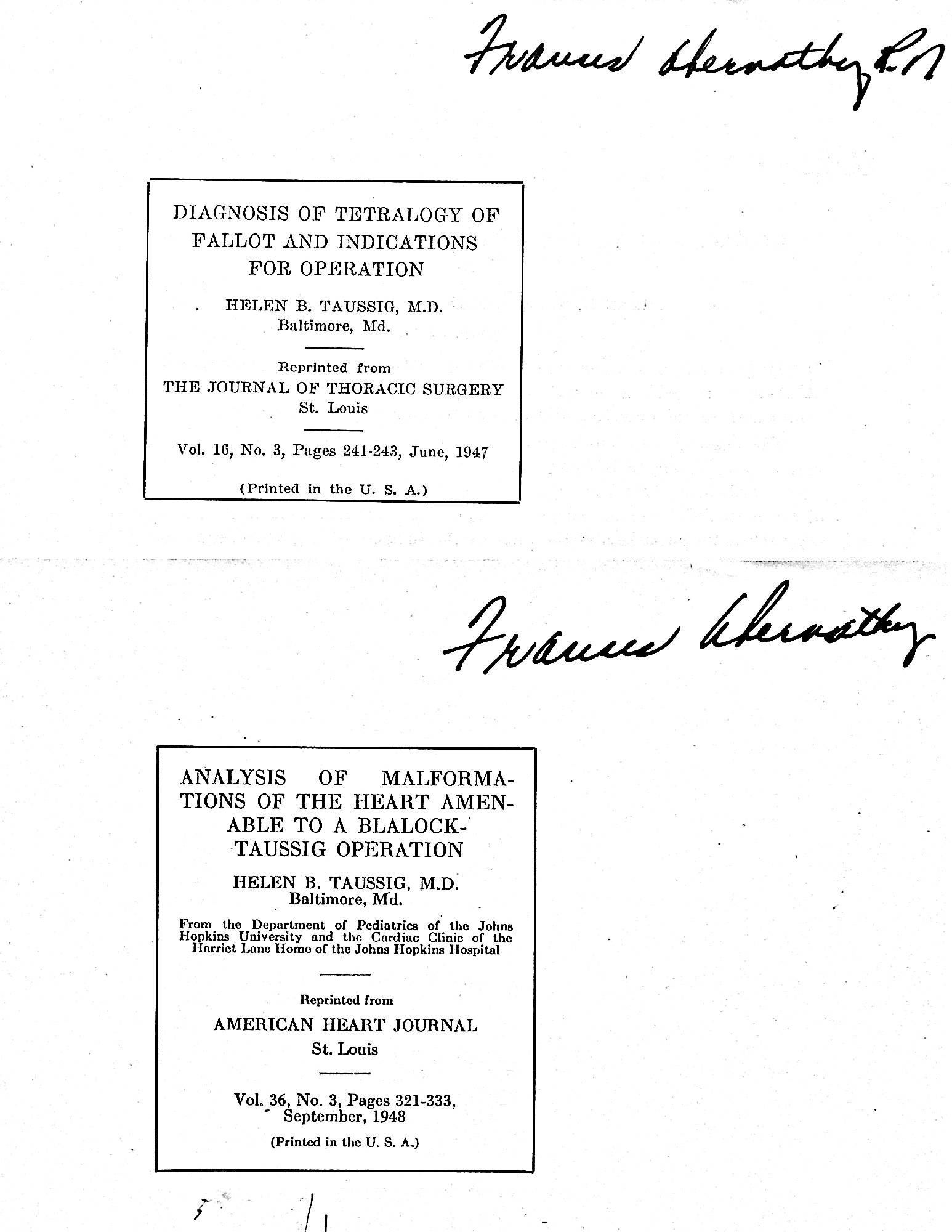 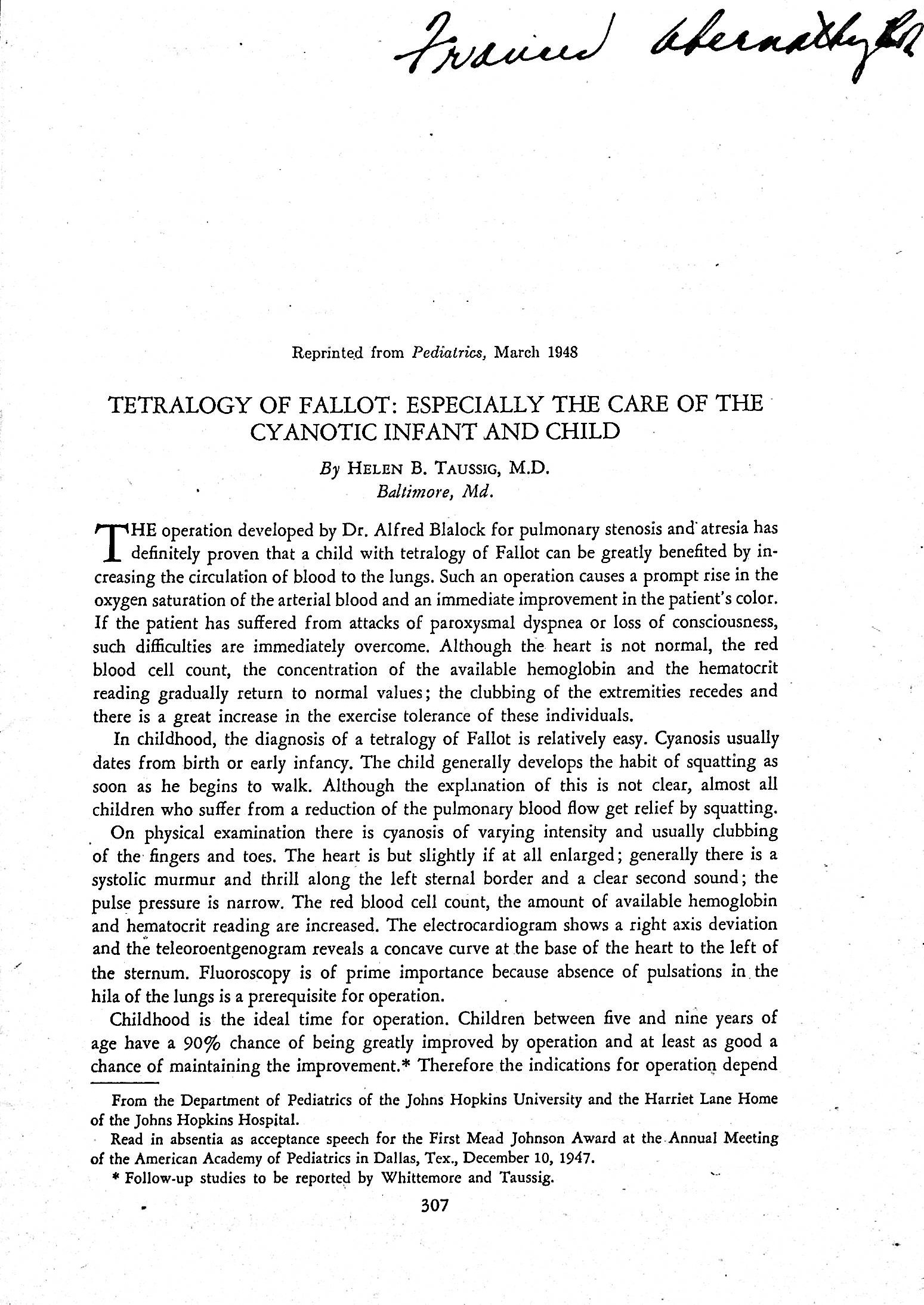 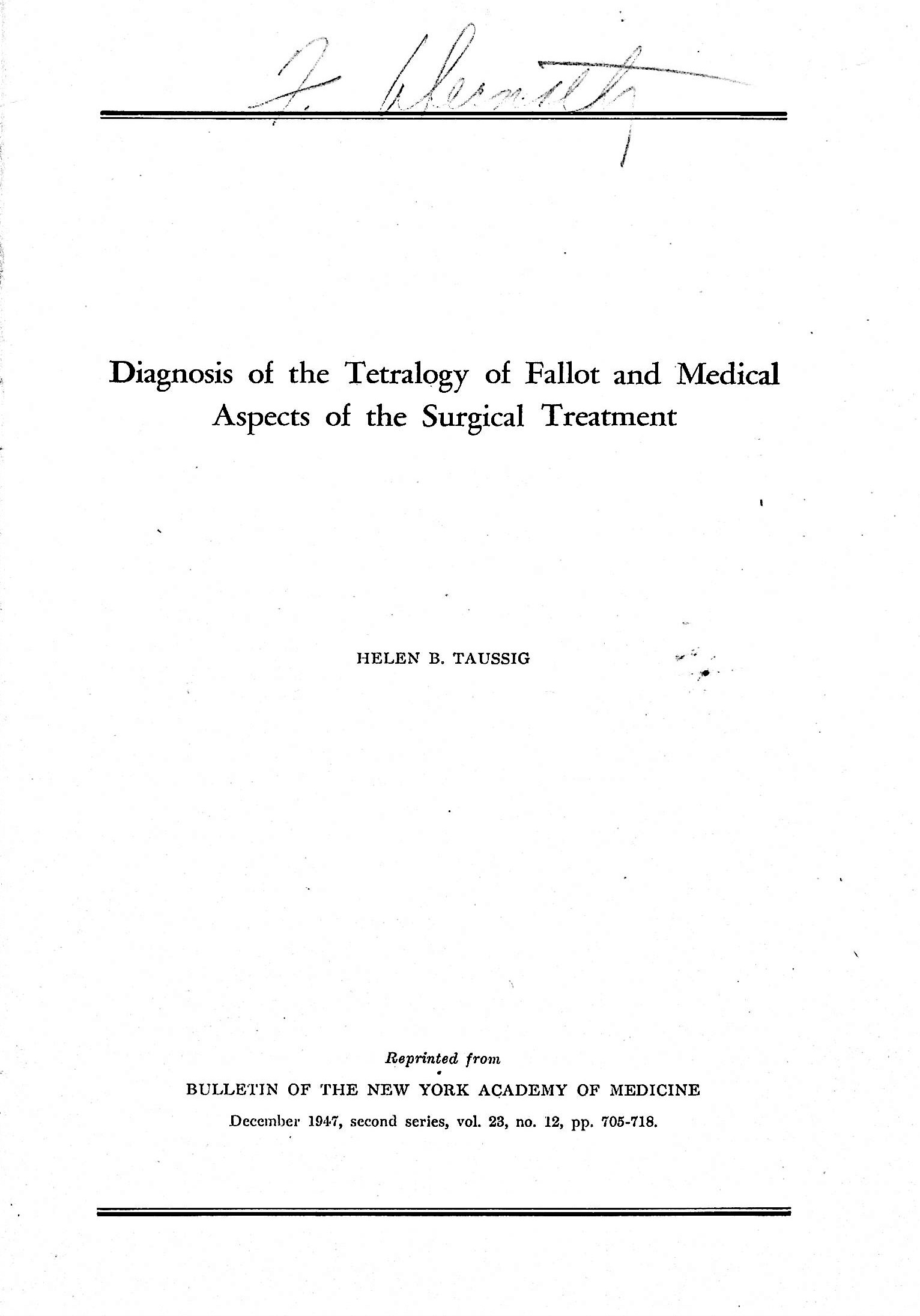 By: Blalock, Alfred and Taussig, Helen B.

ONE OF 100 PUBLICATIONS FAMOUS IN ALL MEDICINE: THE DAWN OF SURGICAL CORRECTION OF CONGENITAL HEART DISEASE--BLALOCK & TAUSSIG, 1945. 1) 8 1/2 inches tall offprint of paper, reprinted from the Journal of the American Medical Association, May 19, 1945. Vol. 128, pp. 189-202, wrapped in blue printed paper covers, stapled binding, text reimposed in single-column pages, with different page breaks, 44 pp, 7 halftone and 5 line-block illustrations in text; unmarked, fine. TOGETHER WITH 4 OFFPRINTS PUBLISHED 1947-48 BY HELEN B. TAUSSIG DESCRIBING TETRALOGY OF FALLOT AND ITS MANAGEMENT: 2) Diagnosis of tetralogy of Fallot and indications for operation. Journal of Thoracic Surgery, Vol. 16, pp 241-243, June, 1947; 3) Diagnosis of the tetralogy of Fallot and medical aspects of the surgical treatment, Bull. New York Academy of Medicine, Vol. 23, pp 705-718, December 1947; 4) Tetralogy of Fallot: especially the care of the cyanotic infant and child, Pediatrics, March 1948; 5) Analysis of malformations of the heart amenable to a Blaclok-Taussig operation, American Heart Journal, Vol. 36, pp 321-333, September, 1948. Each of these offprints is 10 inches tall, unmarked except for the signature of Frances Abernathy RN at the top of each cover, very good. ALFRED BLALOCK (1899 - 1964) earned his MD at Johns Hopkins University in 1922 and completed residency at Vanderbilt University, where he remained on the faculty, developing operations in his research laboratory. He hired Vivien Thomas, a young African-American carpenter, as his research assistant, and Thomas became highly proficient as animal surgeon and as Blalock's assistant in the operating room. In 1941 Blalock returned to Hopkins as Chief of Surgery, and Thomas accompanied him. HELEN B. TAUSSIG (1898 - 1986) earned her MD from Johns Hopkins, where she completed pediatric training as well as fellowship in cardiology (although the subspecialty of pediatric cardiology had yet to be established, which she herself effectively accomplished). She became chief of the department of pediatrics at Hopkins (the Harriet Lane Home), which she chaired from 1930 to 1963. Among the sickest children in her care were the many blue babies--most suffering from tetralogy of Fallot, a congenital malformation of the heart that was inevitably fatal. The fundamental problem in these patients is inadequate blood flow to the lungs: children are deeply cyanotic and have severe exercise intolerance. Taussig proposed to Blalock that they collaborate on the development of a procedure to treat the condition and the first child underwent successful operation in 1944, immediately recognized as a major advance (reported in the paper offered here). Surgeons from around the world came to Baltimore to observe and learn the new procedure, and the media attention was unprecedented. Both Blalock and Taussig contributed greatly to the emergence of their disciplines. Blalock trained many individuals who made major contributions to the advance of surgery. The specialty of pediatric cardiology developed as a direct result of Taussig's active training program in Baltimore, reflected in her 4 papers offered here. These are copies of Frances Abernathy, R.N., (1915 - 1955), who graduated from nursing school at Hopkins in 1941 and later became Assistant Director of Nursing at the Harriet Lane Home. GROLIER 100 BOOKS FAMOUS IN MEDICINE No. 97. The acknowledged importance of the Blalock-Taussig paper in the canon of medical literature is reflected by its inclusion by Haskell F. Norman in the publication of One Hundred Books Famous in Medicine, The Grolier Club, New York, 1995. This listing, curated under the auspices of the Grlolier Club, the most distinguished bibliophile society in America, includes the premier editions of medical publications dating from the 16th century. Authors include Hippocrates, Galen, Vesalius, Descartes, Jenner, Darwin, Pasteur, Osler, Watson & Crick. GARRISON-MORTON No 3043.

Title: The surgical treatment of malformations of the heart in which there is pulmonary stenosis or pulmonary atresia